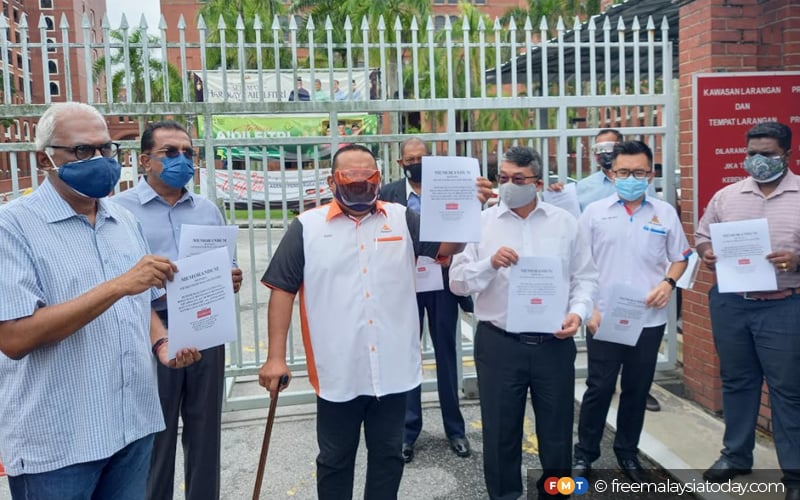 Pakatan Harapan representatives in front of the home ministry on Thursday to submit a memorandum on the custodial deaths.

PETALING JAYA: An MP has called on Suhakam and the Enforcement Agency Integrity Commission (EAIC) to oversee the police investigation and inquest on the two custodial deaths involving the Gombak police station.

Klang MP Charles Santiago said both Suhakam and the EAIC had expertise in the area of investigation and had conducted inquiries like this before, adding that they had lawyers who could help them in the investigation process.

“This process also needs to be transparent so that the results of the investigation can be accepted by the general public.

“These agencies can act as oversight bodies,  and their supervision will help increase the morale of the police and instil public confidence among the police force,” he told FMT.

In response to the home ministry statement that the police had begun investigations, Santiago said the need for an inquiry was already incumbent upon the police by law.

“The Criminal Procedure Code (CPC) Section 329 and 334 actually mandates the police to investigate any death in custody so the question of instruction doesn’t arise. It’s something that they have to do as a matter of legal process,” he said.

The DAP MP also said the silence of the new Inspector-General of Police Acryl Sani Abdullah showed a major failure on his part to respond to a major crisis in the police force, especially on the way the investigation of these custodial deaths had been managed.

Yesterday, the home ministry said they had launched an in-depth probe into the two deaths in custody involving the Gombak police station and had vowed to act against anyone found to have been responsible for them.

In a statement, the ministry said the police had begun investigations into the deaths of cow’s milk vendor A Ganapathy on April 18 and security guard S Sivabalan on May 20.

In an interview with FMT yesterday, outgoing Gombak police chief Arifai Tarawe also vowed to carry out a transparent investigation and stressed that no police officer would want to harm detainees.

This comes after several Pakatan Harapan MPs and assemblymen submitted a memorandum to the ministry on May 27, demanding an independent task force to investigate the deaths of Ganapathy and Sivabalan.